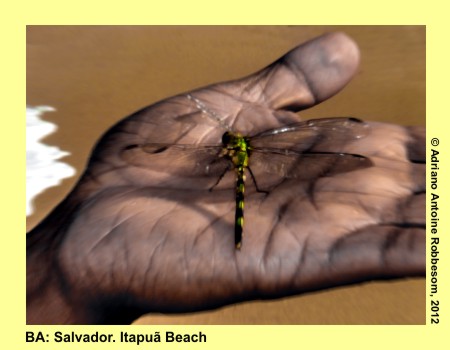 Dragonfly on a Hand at Itapuã Beach, SALVADOR (BA)

Salvador, capital of the state of Bahia, and former capital of Brazil, is very popular among (foreign) tourists. Many tourist will go for the beautiful beaches near Salvador. Beaches as Praia Forte, Stella Maris, Itapuã.
Itapuã Beach is about 25 km north from Salvador. During weekends and holidays, the beach can be overcrowded.  When I was there in July 2006, it was rather quiet on the beach. I made some walks with Brazilian friends. I took some photographs of the coconut trees, and suddenly my eye caught a dragonfly on the beach. Quite a large dragonfly. It did not move, and would not move anymore. One friend had put the dragonfly on his and, and thus I managed to immortalize this poor creature…

The original picture was taken in July 2006.