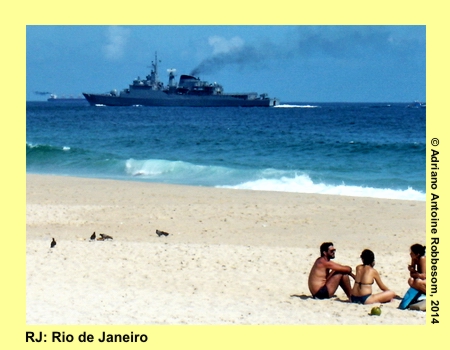 We had returned to Rio de Janeiro, to Ipanema Beach, one of the most popular beaches on the planet. Many tourists, who visit Rio, arrive here to lie down on the beach all day and have them deeply tanned. Especially during Carnival, the beaches in Rio ware one giant, colorful patchwork of sunbathers on their towels or cangas. But late in the afternoon of a normal December day, even Ipanema beach was almost deserted. There was only one couple, enjoying the last sun rays of another bright, sunny day. They didn’t seem to be worried about the warship that is passing close to the shoreline, apparently on the way to the naval port in Rio.