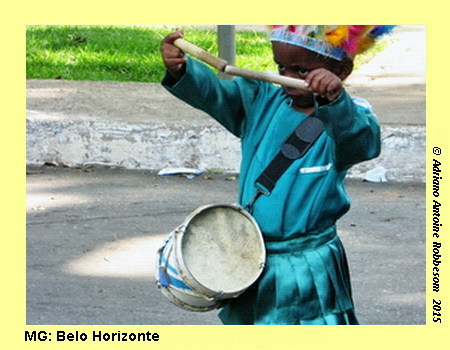 In Brazil, on 20 November, special attention is paid on the awareness of fellow citizens of African descent. This day is called Dia Nacional da Consciência Negra. The day was not chosen randomly, but refers to the death of Zumbi dos Palmares, in 1695, an important historical figure in the slave resistance against the Portuguese rulers. In many Brazilian cities, 20 November is an official holiday. However, it is not the case in Belo Horizonte. Therefore, this day was celebrated on the following Saturday only. There was a so-called cortejo: a parade with much percussion and folklore, in which Zumbi and the African slaves and their descendants are honored. The little boy in the picture also participated in this long parade. He proudly shows that he knows how to play his little drum.