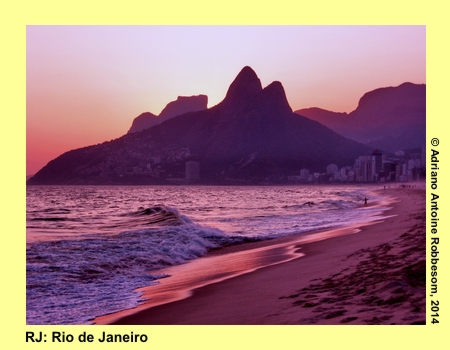 Arpoador Beach is famous for the colorful sunsets. The sunset is generally witnessed by dozens of people who occupy the nearby rock and may applaud and cheer at the end of the sunset show. This picture was made with the use of flash. As a result, the colors red and purple dominate. At that moment, the sun just had set behind the hilltops of the Dois Irmãos (‘Two Brothers’), making these peaks dark silhouettes against a pinkish red sky. The red glow made the color of seawater purple, where as the foam heads are grayish blue and dark blue. As if it were a painting.