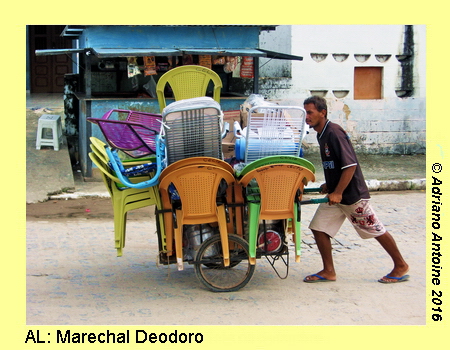 Marechal Deodoro – not far from the popular beach of Praia do Francês – is a small town located about thirty kilometers south of Maceió, capital of the small state of Alagoas. In 1611, the town was founded with the name Vila Madalena the Sabaúma. Little more than two hundred years later, in 1817, it became capital of the Alagoas province under the name of Alagoas da Lagoa do Sul, until 1839, when Maceió became the new capital.  In 1939, the town was named after the first president of Brazil, who was born there. Marechal Deodoro is home to some historic buildings and churches and has a simple street life, which you often find in smaller towns in Brazil. When I was in Marechal Deodoro, I encountered this man who carried dozens of plastic chairs in a creative way on a small handcart.