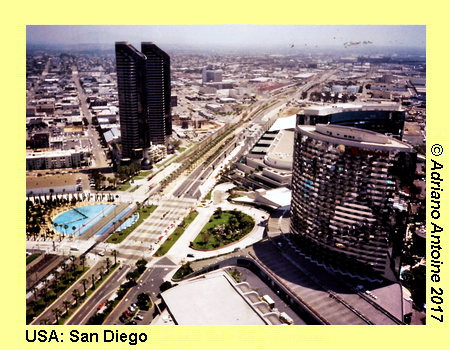 In 1999, I was attending a large scientific meeting in San Diego. It was my first stay in the United States. When I arrived at the airport, I got trouble to direct the cab driver to my hotel, because I was pronouncing ‘Ej Cajon’ in the English way, and not in the Spanish way, as it should have been. For me, it was a pleasant stay in the American border city. I enjoyed my visits to Balboa Park, where I was amazed to see many buildings in the Spanish colonial style. I frequently visited Seaport Village Shopping Center, where I took a decaf (with some refills), when I was preparing my schedule for the following day at the scientific meeting. The picture shows the East Harbor Drive with Children’s Park on the left, and the Marriott Hotel on the right. The San Diego Convention Center is located behind the hotel.