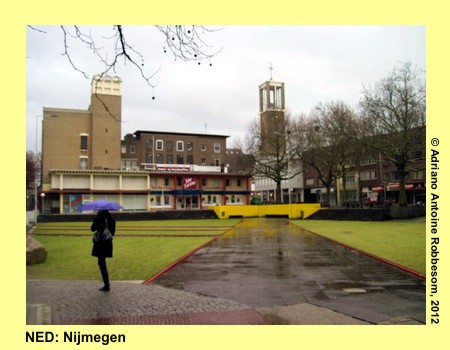 Plein 1944 -freely translated as 1944 Square – is one of the principal squares in the city of Nijmegen. On 22 February 1944, American Air Force planes dropped their bombs upon the center of Nijmegen. By mistake, because they thought that they were above German soil. In the same year, the city was liberated from the German occupation. The destroyed area became a central square between the Grote Markt square and the railway station. Initially, it was baptized into Koning Hendrik VII Plein (King Henry VII Square), who granted city rights to Nijmegen. Soon, the square was renamed into Plein 1944, referring to both the devastating bombing and the liberation in 1944. Gradually, the square became a lifeless parking lot, until the definitive reconstruction that was finished in 201. The square is now much smaller, surrounded by modern residences and a parking garage. At the time of my visit in 2010, a carpet of grass covered a great part of Plein ’44.