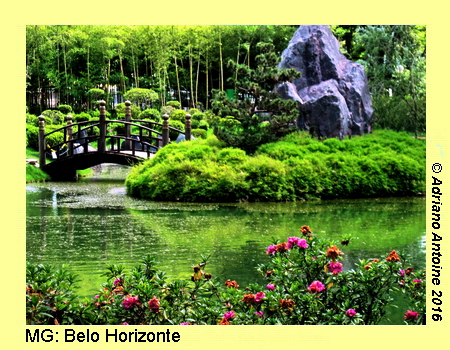 The Zoo in Belo Horizonte is located in the Pampulha District, at Lake Pampulha. The Zoo (Zoológico in Portuguese) was founded in 1959 and also hosts a large Botanical Garden (Jardim Botánico), which was opened for public in 2001. In 2008, when the Centenary of the Japanese Migration to Brazil was widely celebrated, the Japanese Garden was inaugurated. The Garden was an initiative of the Japanese Consul in Belo Horizonte (Rinaldo Campos Soares), the City of Belo Horizonte, and a Japanese-Brazilian cultural organization (Associação Mineira de Cultura Nipo-Brasileira). Landscape architect Haruho Ieda was responsible for the project, which was inspired upon traditional Japanese gardens: a pond with multi-colored koi fish, several Japanese trees (cherry tree, pine tree, bamboo), artificial waterfalls, a traditional tea house, Japanese lanterns and a typical Japanese bridge.