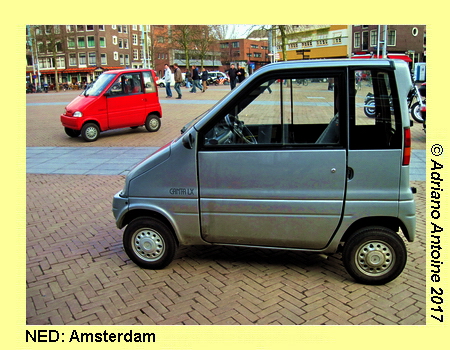 For a long time, the best known slogan for Amsterdam was: “Amsterdam heeft het” (Amsterdam has it). Since 2004, the new slogan is  “I AMsterdam”, which has inspired a lot of new slogans and man-size letterworks all over the world. Also in Rio de Janeiro, where you can take pictures of “Rio_Te Amo” (Rio, I love you). Going back to “Amsterdam has it”: this was indeed the opinion of many Dutch about their capital. Anything you would imagine, or would be beyond your imagination, you would find it in Amsterdam, for sure! People living far from Amsterdam even kept some fear for the big city. They didn’t risk a visit to the beautiful historic center, or have a walk along the canals. It was dangerous, and you would many strange people. When I studied in Amsterdam, I started to love the city. And for me it is not too strange to see these two micro cars on a big square.