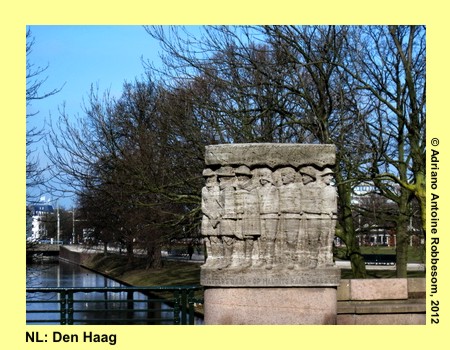 Like Amsterdam, The Hague also has a Canal District: de Grachtengordel. During the Twelve Years’ Truce (1609-1621) of the Eighty Years’ War (1568-1648) or the Dutch Independence War, Prince Maurice de Nassau ordered the construction of the Canal District as a defense system. However, they’ve never been used actively in the defense of the city. The Koninginnegracht (Queen’s Canal) as seen in the photograph, is one of these canals. At the Heerenbrug (Patrician’s Bridge), this monument commemorates the completion of the Canal District in 1619. The monument, inaugurated in 1932, was sculpted by Joop van Lunteren. The personages in the relief are a soldier, prince Maurice, prince Frederic Henry, probably Christian Huygens or Simon Stevin, and some builders.