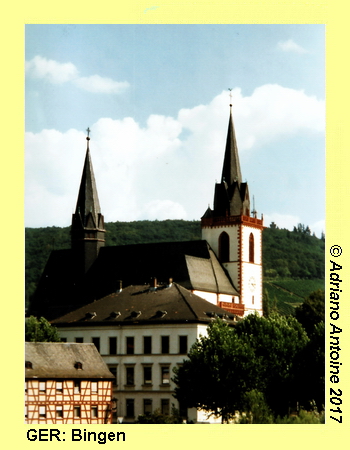 Bingen is a small town in the German state of Rhineland-Palatinate, where the Nahe River flows into the Rhine River. This confluence was an ideal location where first Gauls settled (Binge), followed by the Romans (Bingum). Here started the Roman road to the city of Trier. Bingen has suffered much from many wars and fires. However, some principal monuments have been preserved, like Burg Klopp (Castle), MäuseTurm (Mouse Tower, from where a legend tells about a cruel archbishop eaten by mice), and the Basilica of St Martin. There is proof that the Romans had their temple for Mercurius. On the same location, a crypt was built in the 8th century. In 1006, the church was mentioned for the first time in documents. Enlargement took place in the 15th century, and large-scale restoration was performed in the 19th century. The basilica became heavily damaged during WWII, and restored in 1958.