A selection of photographs taken in Brazil in 2009. 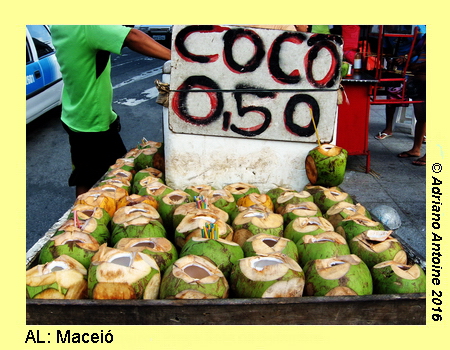 The famous Praia do Francês is located at about thirty kilometers south of Maceio. It is easily accessible by bus or by a van. The wide beach and the calm and shallow sea water are perfect for the entire family to spend a wonderful day on the beach. Dozens of beach pavilions offer a wide range of meals, snacks and drinks, albeit at high prices. If you walk just a few hundred meters behind the pavilions, you can encounter little restaurants serving simple but tasty meals for a reasonable price. At such popular beach, you inevitably meet many vendors trying to sell their merchandise. Like this friendly vendor, who proudly shows one of his creations, made from a coconut.

A selection of photographs taken in Brazil in 2008. 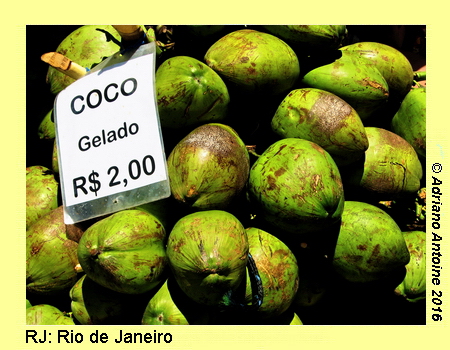 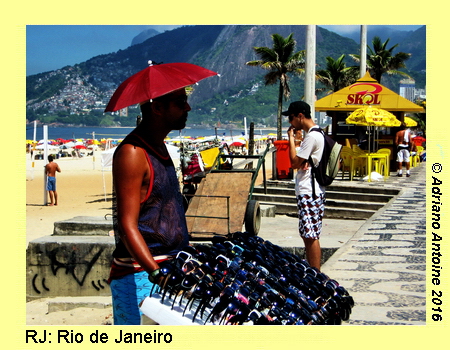 A selection of photographs taken in Brazil in 2005.

A selection of photographs taken in Brazil in 2006.

Salvador (BA) – Coconut in the sky

Salvador (BA) – Bicycles on the beach

In July 2008, I stayed – together with a group of students – in Maceió, capital of the state of Alagoas, for ten days. We escaped the cold days and nights of Belo Horizonte, and enjoyed very much the warmer climate of Alagoas and warm seawater.  We visited Ipioca Beach, near the capital. The beach was easy to be reached by bus. We took a long walk on the beach, had our warm meal at a barrack, and enjoyed a bath in the ocean water. I had already gained reputation with making pictures, and I was regularly called to take pictures of the group. Pictures of them on the beach, in the water, on a flat-bottomed boat, on a palm tree stump, with a dog, or even taking a nap on the sand. Nothing was too crazy for them. However … I had my own crazy moments. I tried to take pictures of a coconut in the air. I threw the nut in the air, while I aimed my camera with my other hand. It was pure coincidence that a man was walking along, when the nut fell, and now it appears that coconut had gained two legs.

We were at Itapuã Beach, not far from the city of Salvador. Suddenly, we witnessed a miracle, a natural wonder. We rubbed our eyes. That cannot be true! We stared at the ocean, where we saw a green coconut hovering above the rolling waves. According to my high-school knowledge of physics and biology, this is absolutely impossible. A coconut is much heavier than air and should plunge in the ocean. We didn’t notice any invisible thread, there was no flying balloon linked to the coconut. What was going on? To prove that we really have seen the floating coconut, and that this observation was not due to drinking a lot of alcohol, I took this picture.

Accompanied by two friends, I entered a small area of palm trees, just behind Itapuã Beach. I paused at a palm tree. For a long time, I have been developing a certain passion for these majestic trees. When I was in Portugal, it made me feel good to see palm trees, and I was missing them as soon as I had left Portugal. Now I can enjoy many palm trees of different species in Brazil, every day. These exotic trees are not only wonderful to look at, but they can also be quite dangerous. Sometimes, when a giant palm leaf drops down, it is recommended not have it hit on your head. Let alone the heavy coconuts, which can knock you out instantly… Suddenly, I heard a loud crack from above. Crack! I didn’t hesitate, and pointed my digital camera to the source of the cracking sound and made the picture. This picture shows a coconut in free-fall.

One of the most beautiful beaches of the tiny Brazilian state of Alagoas is Gunga Beach. This wide beach can be reached by a secondary road through private land, or by a  boat service from Barra de São Miguel. The beach is flanked by a large coconut plantation, thereby providing an idyllic composition of white sands, green exotic coconut trees, and azure blue sea. I was lucky enough to visit Gunga Beach three times: in July 2008, when staying in Maceió (AL); in August 2009, also staying in Maceió; in July 2010 , when traveling to João Pessoa (PB). During my second visit, in 2008, it rained that day. But even in the rain, this beach is worth visiting!

The original picture was taken in July 2008.