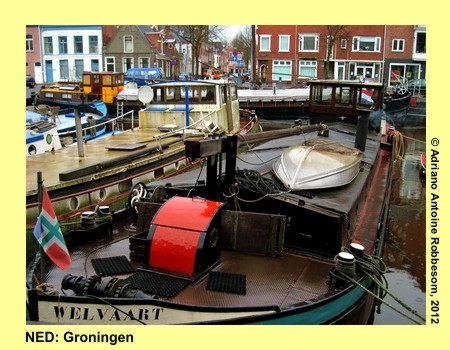 Groningen is a city with a lot of history. Its origin is unsure – some even tried to refer to expelled people from Troy, led by the legendary figure Guno, that settled there. More likely, the first settlers must have arrived in the region about 1700 years ago. As happened with many historic cities in the Netherlands, Groningen gained a canal system (‘grachtengordel’) as a means of defense against invaders. The canal system in Groningen is called the ‘Diepenring’. The boat in the photograph is a Dutch bark, most probably a ‘tjalk’: a flatbottom vessel that is used for transport over the Dutch waterways. There are still many Dutch barks in circulation: some of them have been transformed into “woonboten’, barks used for permanent residence.