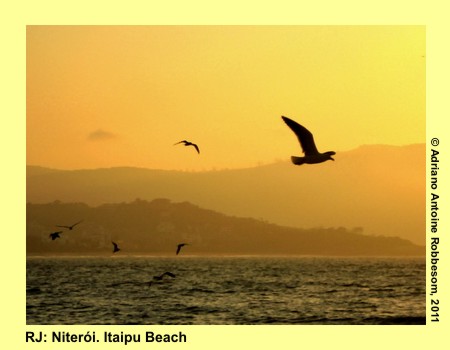 From the center to Rio it is easy to take the ferry to cross the Guanabara Bay and visit Niterói.
Near the Ferry Station, one may get a bus to the beaches of Itacoatiara and Itaipu.
Small beaches, flanked by huge rocks. There are some bars and restaurants offering drinks and home-made food.
That day in August, a lost penguin appeared in the waves. Quickly the poor bird was drawn from the water by helping hands.
The fire brigade was alarmed, they arrived one hour later to rescue the penguin. That winter, about 400 lost penguins arrived in Niterói only. They later were transferred to the south of Brazil to be released.
That afternoon, we witnessed one of the most beautiful and colorful sunsets, that I have experienced in Brazil.
Gulls were flying low over the water, in the search of their daily meal.
The final minutes of daylight provided a colorful scene, from yellow turning into red.
No wonder that sunsets receive applause at Ipanema Beach, in Rio de Janeiro.