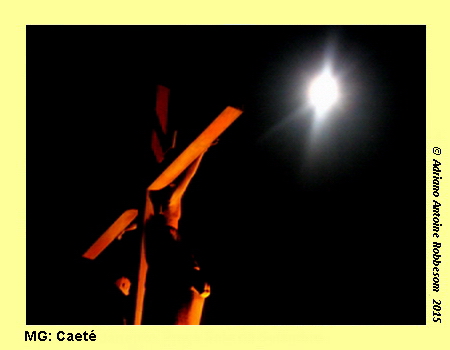 FEBRUARY 2008: The Cross at Full Moon

In February 2008, a lunar eclipse was visible in Brazil. I was invited by a friend to join him on his visit to the top of the Serra da Piedade in Caeté, a small historic city at about 50 km from Belo Horizonte. A observatory, property of the local federal university, was located on the top – at a height of about 1750 m -, and open for public. Not far from this observatory was the Nossa Senhora da Piedade (Our Lady of Piety, i.e. Virgin Mary) chapel. In front of the chapel is the so-called cast-iron Calvário, sculpted by Vlad Eugen Poenaru: a huge cross with the image of Jesus Christ, flanked by Virgin Mary on His left, and Saint John on His right. A few hours before the eclipse, it was as if Jesus Christ was facing the full moon. Although it was autumn with tropical temperatures, it was very cold on the mountain top. However, the spectacular view of the lunar eclipse was worth the freezing cold.