This delicious dessert on the colorful plate was served in Santa Luzia, a suburb north of Belo Horizonte. Santa Luzia is a small historical city, but has expanded greatly in the past decades to more than 200 thousand inhabitants.
Quite a few inhabitants from Belo Horizonte have their second home within the borders of Santa Luzia, some of them have a so-called sítio, a kind of weekend resort, in a large, green area. Such a sítio is a simple construction, without excess of luxury. Most important are the kitchen, the shower, and a lot of beds and mattresses. Because of the islolated location, people are free to organize big parties that may last a few days even. No one to bother or to be bothered. One may scream, sing, play loud music without problems.
At such a party, this pudim was served.

Pudim (de leite) is a dessert made of condensed milk. In English it is known as Flan, or Crème Caramal, originating from France or Spain. To prepare the pudim, one use two cans of condensed milk, two cans of milk, and five eggs; for the caramel sauce, one use one part of water and two parts of refined sugar. First, the caramel sauce is prepared by heating the ingredients, then the ingredients for the pudim are mixed together and added to the sauce. The form with the pudim is then slightly heated, followed by cooling in the fridge. The pudim is served cold.

Aquidauna is a municipality west of Campo Grande, capital of the state of Mato Grosso do Sul. Its size is half of Belgium and counts about 45 thousand inhabitants only.  The city itself is located at about 140 km from Campo Grande.
The bus travel from Campo Grande took about 2 hours. The first hours in Aquidauna were quite hot, with approximately 42 degrees centigrade. A sudden and fierce breeze did the temperature drop to about 32 degrees in less than one hour.
The principal church is located close to the Aquidauana River, that forms the border with neighboring municipality Anastácio.
The Saint Francis Church, inspired upon gothic architecture, was built in the thirties of the past century.

Camera: Canon PowerShot A1100 IS

People in Brazil: Descent of Man in Atins (MA) 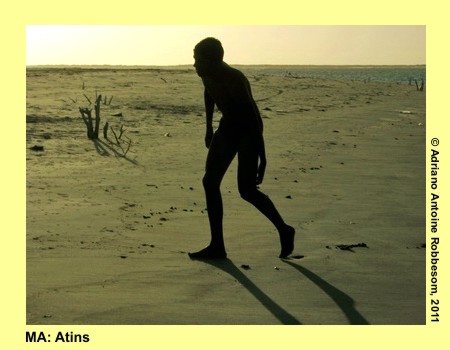 Atins is a small coastal village at the border of the immense dune landscape of Lençóis Maranhenses.  From Barreirinhas – gateway to the dune landscape – we made a 4-hour boat trip to Atins.  From the village, it was a 30-min walk to the beach. While the pure white sands were feeling pleasantly cool under our feet, the brownish sand in Atins was really hot, we almost burnt our feet.
The beach at Atins is very different of what I was used to see at other Brazilian locations. This beach looks somewhat wild, with shrubs and bushes and grass growing in the sand, as if it is an arid landscape. Like we were in a desert instead on a beach.
The combination of a tired-looking bus driver walking toward us, and the apparent desert landscape results in the composition above: Like a vivid example of the evolution theory of Darwin: our ancestors trying to walk on two feet, the descent of man had occurred here, in Atins.

The Brazilian state of Maranhão is widely known for hosting the immense dune landscape of Lençóis Maranhenses. From Barreirinhas – gateway to Lençóis Maranhenses -, one may join a boat trip in  the really lazy Preguiças River. The regular, and thus cheap, boat ride took more than four hours, to arrive at the final destination: Atins.
Atins is a very small coastal village, with one main road. From there, it is a short walk to the beach of Atins, and reach the Atlantic Ocean. It is not a beach with white sands and palm trees, but a rough beach, with tiny shrubs and grass growing on greyish brown sand.
Near the shoreline, one may find some clay humps, ideal for pottery. Also suitable to dirt your hands with.
The girl in this photograph demonstrates the clay that made her already tanned hands much darker. 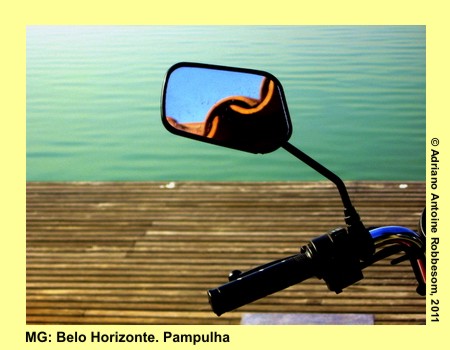 It was on a sunny winterday at Lake Pampulha in Belo Horizonte. On a Sunday afternoon, I made a walk along this artificial lake. I did not complete the entire lake, since its perimeter measures more than 18 km. But I have to inform you that I already have completed this distance four times, and have taken photographs of every 100 meter.
I halted at Casa do Baile, visited the temporary exhibition in there, and then visited the nearby tourist information center. The building was rather new then, the personnel was not really prepared to their new tasks, at that time. But I managed to obtain a new, monthly, brochure of the city, with the new activities of that month.
Next to the center, I encountered a motor cycle. I am not really fond of motor cycles, but the way this vehicle was parked drew my attention. The wooden floor, the calm water of the lake. The somewhat dirty mirror showing the sunny moment of that day: a clear blue sky. And fragments of some roof tiles.
I really liked this composition: the solid floor, the liquid flexibility of the water in the lake, the limitlessness of the blue sky, and the shelter of the roof tiles, reflected by the rearview mirror. It was as if I was observing myself in that.